Steam, diesel, and electric trains are the highlight of a special weekend excursion to Scranton, Pa., on July 29-30. Travel with the members of the Rochester & Genesee Valley Railroad Museum by deluxe motorcoach to ride historic trains on the Delaware-Lackawanna Railroad, Steamtown National Historic Site, and Electric City Trolley Museum. Visitors will enjoy a private excursion on the Delaware-Lackawanna from Scranton to Delaware Water Gap and return on Saturday. The special excursion will be powered by vintage Alco diesels and ticket upgrades will be available to ride in the railroad’s 1936 luxury executive observation car. On Sunday, a chartered trolley will take visitors from the Electric City Trolley Museum on a five-mile run through the historic Crown Avenue Tunnel to the baseball stadium in Wilkes-Barre. Upon return to Scranton, we will tour Steamtown NHS and take a short steam train ride around the yards and museum facility. Tickets for this trip are $300.00 each ($275.00 for RGVRRM members), and does not include food or lodging.

Our deluxe motorcoach will depart from the Rochester & Genesee Valley Railroad Museum at 6:00 a.m. We will disembark at the Radission Lackawanna Hotel (the former Delaware, Lackawanna & Western station) for our private excursion on the Delaware-Lackawanna Railroad. Powered by Alco Century-series diesels, the train will consist of one ex-NJDOT “Comet” commuter coach, and Erie Lackawana business car No. 2. A limited number of ticket upgrades for $75.00 each are available to ride in EL 2 (UPDATE: This upgrade option has SOLD OUT). Our train will depart at 10:00 a.m. and proceed to Gouldsboro station for a photo run-by. The next stop will be East Stroudsburg at 12:30 to tour the restored interlocking tower and stop for lunch (on your own). The train will continue to the end of the line at Slateford Jct., where the diesels will be runaround to the other end of the train with a 5:30 scheduled arrival at Scranton for dinner.

Following breakfast at the hotel, our group will spend the day touring Steamtown NHS and the Electric City Trolley Museum. A private chartered trolley has been reserved for us to depart Scranton at 12:00 p.m. for a spirited five-mile run along the former Laurel Line interurban route to Wilke-Barre, Pa. Admission to Steamtown NHS includes a self-guided tour of the exhibits and displays as well as a short steam train ride around the yards using Baldwin 0-6-0 No. 26.

You must make your own arrangements for lodging. The museum has reserved a block of rooms at the Comfort Inn & Suites in Moosic, Pa. You must call (570) 347-1551 and ask for the Rochester & Genesee Valley Railroad Museum block of rooms for Saturday, July 29. Your choice of rooms will be either a room with two double beds or a room with a king size bed. Ask for a guaranteed late arrival.

UPDATE: The block of rooms has been released however if the hotel still has rooms available, they will honor the $79 price/room for a total of $79.10 including tax.

You are responsible for your own meals throughout the weekend. Free breakfast is provided at the hotel on Sunday, July 30.

The Rochester & Genesee Valley Railroad Museum would like to thank the following organizations and individuals for their support of this special trip:

How to Find Us 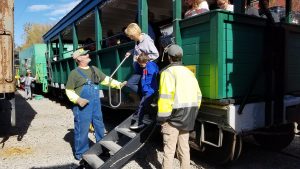 Visit the only railroad museum where you can ride the exhibits! Enjoy a mile-and-a-half round trip train ride through our museum grounds, and tour our collections and displays at both ends of the ride. We maintain the largest collection of operating historic trains in New York State.